Major CHANGES COMING TO THIS WEBSITE in January and February 2023.
We are for gender equality of opportunity and even certain equality of outcomes but these are contrary to the objectives of the EXTREME FEMINISTS that want a gynocentric society and special privilege for females. 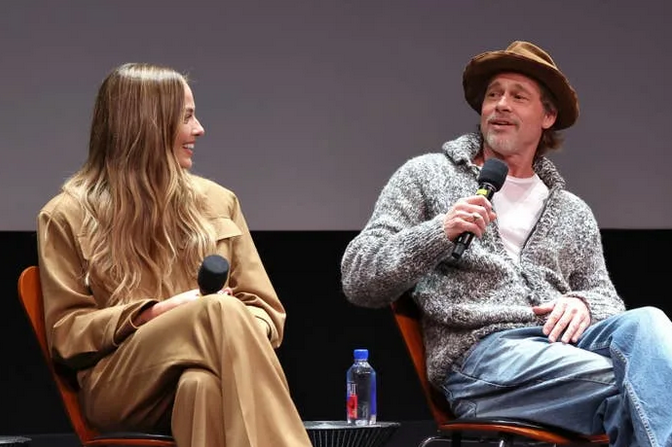 Two months ago, the first trailer for upcoming period comedy-drama Babylon was released — and it quickly garnered tons of hype.

The film, which is set to be released in select theaters on Dec. 23 and elsewhere on Jan. 6, was directed by Damien Chazelle, who also wrote and directed critically acclaimed projects La La Land and Whiplash.

But aside from the film's renowned director and attention-grabbing trailers, the ensemble cast of Babylon has left fans all the more excited for its release, with Brad Pitt, Margot Robbie, Diego Calva, and Tobey Maguire being just a handful of its big names.

In the film, Margot plays aspiring actor Nellie, who recruits Manny, portrayed by Diego, and Jack, played by Brad, to help her find success and stardom in 1920s Hollywood.

Discussing the project during an interview with E! News, Margot shed a little behind-the-scenes light on one of the biggest additions to the movie.

After revealing that she and Brad share a smooch in the film, Margot admitted that the kiss actually “wasn't in the script” at all and was completely improvised by her.

“That wasn’t in the script,” she said of the kiss. “But I thought, When else am I gonna get the chance to kiss Brad Pitt? I'm just gonna go for it.”

And so, Margot took matters into her own hands to ensure that she got her long-awaited kiss with Brad.

In speaking with the director, Margot convinced Damien that her character Nellie kissing Jack would make total sense.