The change is contained in draft legislation released for discussion yesterday by Attorney-General Robert McClelland.

The proposed changes to the Family Law Act come after Labor MPs, particularly women, raised concerns that the Howard Government laws had gone too far and were hurting vulnerable children. Read More …

The Australian, 11 November 2010, By Chris Merritt and Patricia Karvelas

The Gillard government has unveiled radical changes to family law.

Parents' groups and welfare organisations are welcoming most of the findings from a federal parliamentary inquiry into child custody arrangements.

The joint parliamentary committee is recommending a major shake-up of the nation's child custody system, including significant changes to family law, courts and custody support payments.

In particular, the committee recommends a presumption of equal responsibility for children when a family breaks down, but has shied away from legislating it. Read More …

Australia's Minister for Children, Larry Anthony, says the government will seriously consider all the recommendations in the parliamentary report recommending a Families Tribunal to deal with child custody issues in a marriage break-up.

Mr Anthony says the government has already acknowledged that the current system needs to be improved.

But the Minister adds establishing a Families Tribunal will take time. Read More …

Justice system let me down

AN Austinmer father says he is angry and bewildered by a judge's comments to brand him a sook for going to police after his former partner assaulted him in front of their eight-year-old son.

Judge Paul Conlon upheld Tanya Austin's appeal over a lower court conviction for the assault and said police should have told Martin Mondzheyovsky to "man up".

"What really concerns me is the way the judge trivialised a clear-cut case of domestic violence and belittled me for reporting the assault," Mr Mondzheyovsky said yesterday.

"I'm a law-abiding citizen and believe in women's rights, but I also believe men are entitled to the same protection when it comes to this sort of thing." Read More …

A STRUGGLING single mum who hit her ex with a plastic bottle after he bragged to her about his surfing holiday, while paying her minimal child support, has been vindicated in court.

Office manager Tanya Austin was "at breaking point" when she lashed out and threw a plastic bottle at the face of her ex-partner on September 26.  Read More …

Separated fathers could find it harder to secure 50-50 custody of their children, and women should be more easily able to raise concerns about violence, under proposed changes to the nation's custody laws.

Federal Attorney-General Robert McClelland said the Government was considering the suggestions after he released three reports, which looked at hot-button family-law issues such as shared parenting and violence.

Three years ago the Howard government introduced shared parenting rules, which required the Family Court to set arrangements where both parents could be involved in their children's lives after a divorce. Read More …

The Australian, by Caroline Overington, 29 January 2010

Men's rights groups will fight any planned rollback of the shared parenting laws, saying reports released yesterday prove an overwhelming majority of Australians support the right of children to know both their parents after divorce. Read More …

Feminism has latched onto sexual-harassment laws as a successful way of bringing men to heel, says a University of Massachusetts professor and sometime feminist in a new book.

In "Heterophobia," Daphne Patai says that sexual-harassment law, once a useful tool to identify outrageous behavior, is now an albatross.

"Sexual harassment seems often to be little more than a label for excoriating men," she writes. "It has become the synecdoche for general male awfulness."

University students are schooled in "the patriarchy" and "compulsory heterosexualism," she says, and schools, such as her own, hire "sexual-harassment consultants" to help them avoid lawsuits. One of her footnotes details how one firm charged her school rates of $1,250 to $1,800 per trainer per day, plus $10,000 for hotel, travel and meals, to offer courses in sexual-harassment prevention and risk management. Read More …

A federal parliamentary inquiry has recommended a wide-ranging shake-up of Australia's family law, including an overhaul of child custody payments.

The House of Representatives Family and Community Affairs Committee has recommended that in family breakdown situations, a 50-50 share of a child's custody should be the "standard objective" but says that aim should not be enshrined in law.

Prime Minister John Howard set up the joint parliamentary committee in June, asking it to investigate Australia's child custody system and "in particular, whether there should be a presumption that children will spend equal time with each parent and if so, in what circumstances such a presumption could be rebutted".

"We have concluded that the goal for the majority of families should be one of equality of care and responsibility, along with substantially shared parenting time," the report says. "They should start with an expectation of equal care. Read More …

The Turning of the Tide: With Special Guest Rod Hardwick, President of DADs Australia.

This week it's impossible to ignore the efforts of one of the country's leading broadcasters, Alan Jones at 2GB. The number one breakfast show host has taken up the plight of non-custodial parents and child support payers with a vengeance, describing the situation as a "social scandal". As a result he has been swamped with hundreds upon hundreds of emails.

He says he has never had a response like it on any issue after raising it on his radio show and on television at the Today Show. Read More …

During an interstate access visit, and a trip to the Melbourne Show, Bill told his 14-year-old son he was going to take him for an allergy test.

The test was in reality a DNA parentage test, to establish the likelihood of Bill being the boy's biological father. The fallout is set to force the Federal Government to amend the Family Law Act so that men who prove they are not the biological fathers can recover child maintenance payments. Read More …

The Advertiser (Adelaide), 30 December 2003, By Maria Moscaritolo in Canberra

Separated parents would share equal responsibility for their children's upbringing under a proposed overhaul of the family law system which recommends sidelining the involvement of the Family Court.

"Each parent should start with an expectation of equal care and should have equal say as to where children should reside."  Read More … 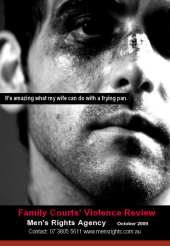